With a convenient location in north-central Texas, the City of Mesquite is only twelve miles east of Dallas. Bordered on the south by Balch Springs and on the north by Garland, Mesquite hosts the Mesquite Championship Rodeo and is known as the “Rodeo Capital of Texas.” Additionally, Mesquite sits near the intersection of Interstate 635 and Interstate 30 along U.S. Route 80. Incorporated in 1887, the community has roots dating back to 1873. In its early years cotton was Mesquite’s primary industry and the community thrived and grew steadily, though slowly until 1950. Between 1950 and 1970 the population exploded, leaping from two thousand citizens to over fifty-thousand residents. A great deal of its growth was the result of the urban sprawl of Dallas. Today the city’s culture and heritage are preserved by the Mesquite Historical Commission which was formed in the 1980s. The Commission is now known as Historic Mesquite, Inc. and continues to be active on projects throughout Mesquite.

Beyond its convenient location and well-preserved heritage and history, Mesquite also has a multitude of fantastic options for recreation, entertainment, shopping, and dining. In addition to the aforementioned rodeo, Mesquite also encompasses the Mesquite Community Band, the Mesquite Symphony Orchestra, the Mesquite Community Theater, a large art gallery, and over sixteen arts groups. Other attractions in Mesquite include Rodeo City Music Hall, Devil’s Bowl Speedway, and several points of historical interest such as the late-1800s Florence Ranch Homestead and the Texas Queen double-deck paddle wheeler. Moreover, Mesquite has convenient proximity to Dallas Fort Worth and all of the metro’s incredible services, amenities, and attractions, which include Fort Worth Stockyards National Historic District, Six Flags Over Texas, West End Marketplace, and the Dallas World Aquarium and Rainforest.

Furthermore, Mesquite real estate is quite impressive, too. Homes for sale in Mesquite consist of a wide variety of properties ranging from low-maintenance attached residences, like apartments, condos, and townhomes, to a vast array of detached single-family homes of varying ages, square footage, and architectural design. Real estate in Mesquite also includes acreages and vacant home lots in new construction developments for those seeking to build a custom home. Similarly, Mesquite properties are found in a wide variety of neighborhoods and subdivisions, including Hagan Hill, Ridge Ranch, Trinity Point Village, Trailwind, Polo Ridge, Mesquite Park, and Casa View Heights, among many others. To give you an idea of the diversity available in Mesquite neighborhoods, there are stunning historic homes in Sherwood Forest and Truman Heights, while Iron Horse Village offers a variety of bungalows and Mesquite townhomes. Please connect with us as soon as you are able and we will happily tell you more about the currently available properties in Mesquite, Texas.

Our website features the best Mesquite real estate search for homes, condos, land and foreclosure properties available. It is the only site you will ever need! It is easy-to-use and updated by the official REALTOR®’s database every 15 minutes.

You can save searches, and get daily email alerts of new listings, price changes, sold data, and market reports. Our Interactive Map Search allows you to view properties on a map or refine your search by drawing the boundaries around the area you desire.

Curious about what’s happening in the Mesquite real estate market? Sign up for a Mesquite Real Estate Market Report to see what’s active, under contract, and sold!

Contact us today to find out how we can be of assistance to you!

Welcome home to this completely renovated 3 bedroom, 2 bath with 2 car garage. Foundation has been leveled. Laminate flooring throughout, Granite counters throughout, and...

Updated and ready to move in spacious home that has 4 rooms downstairs and a loft upstairs. Interior features include multiple living areas, great natural lighting throu...

Lots of updates in this beautiful two story home. Master bed and bath downstairs for lots of privacy. Loft for game room or play room for the kids. Updated bathrooms an...

This charming home with an open concept greets you with beautifully updated finishes. There are four well-appointed bedrooms, including a spacious master, and two full ba...

Courtesy of U Property Management

Listing courtesy of U Property Management.

Calling all investors and those who like a project. This home has much potential and needs your creativity. It is complete with 3 bedrooms 2 full baths and a 2 car gar...

Original owner property located in the heart of Mesquite, this cozy home offers 3 bedrooms and 1 full bath. This property is within walking distance to the schools and in...

INVESTOR SPECIAL - PROPERTY IS BEING SOLD AS-IS. This home is a perfect flip project or rental. The property will need foundation work.

Courtesy of Rogers Healy and Associates 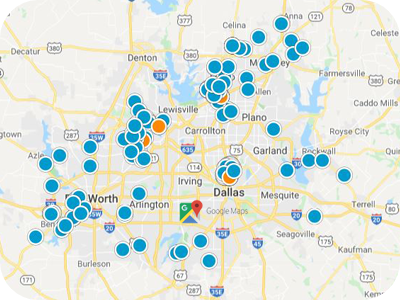